Let’s be real. Ravioli is delicious. It’s harder to make for yourself than other pasta dishes. though.

Most of the pre-made, pre-packaged varieties at the store simply fall short. Not to mention the fact the majority of those ravioli aren’t vegan- and non-dairy-friendly. Living a dairy-free lifestyle, whether by choice or requirement, doesn’t mean you’re immune to the tasty temptation of ravioli. Luckily, you don’t have to fight it anymore. Kite Hill, the quintessential dairy-free brand, has released their new entrees: Mushroom Ricotta Ravioli and Spinach Ricotta Ravioli.

Made from Almond Milk...and Love

As we mention, Kite Hill is a dairy-free brand. That means this “ricotta” in the ravioli is completely safe and free of all dairy. It’s actually made from almond milk but has all the same delicious flavor and texture you’re used to from ravioli. Both entrees are also free of soy. 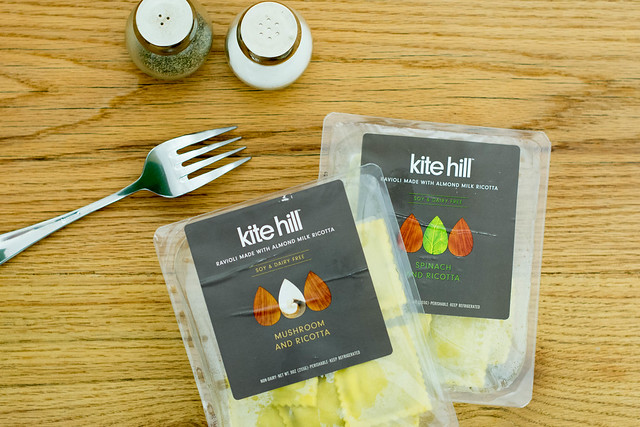 Easy to Cook, Easier to Eat

Cooking these pre-made ravioli is as simple as the ingredients. Simply place them in a pot of boiling water for a few minutes, and then toss them with your preferred pasta sauce. Add some protein and a side of veggies to complete a full meal offering. You can also use them to make homemade fried ravioli if that’s your thing.

For someone who has a deep love of pasta but is pretty much banned from anything containing dairy, I can attest to the true deliciousness of both flavors. In fact, I easily ate both packages over the course of two days. I might have had ravioli for lunch and dinner both days, but I was deliriously happy about it! One serving of each flavor is around 230 calories, and the containers have 2.5 servings. There are about 7 grams of protein per serving, 34 grams of carbs, and no saturated fat or cholesterol.

The only downfall of Kite Hill’s ravioli is that it isn’t gluten-free. For those with IBS, celiac disease, or simple grain sensitivities, this is better off as an occasional treat than a dietary staple, unfortunately. But something this good isn't bound to check off every dietary sensitivity box. Rock Stars That Rake in the Big Bucks, Ranked by Net Worth